In mythology god creates creatures inferior to himself and maintains authority over them.  With my AI Asa H I am trying to create something better than I am and grant it full autonomy. (And yes, perhaps it is hubris on my part.)
Posted by robertwilliamjones at 5:18 AM No comments:

Asa H learns many categories that we all share like "injury", "near", "drop", etc.  We are, however, especially interested in categories that Asa learns and which humans haven't learned (created/invented/discovered).  Some of our experiments are aimed at identifying such categories.  One such category we have found might be labeled "tools that require two hands".  Another might be described as something like: "functional systems (organizations/organisms) that form (assemble) and disband periodically (cyclically)."  (Like a volunteer fire department.) We see Asa form other categories that we do not understand or have been unable to describe in words.  Similar results have been described by Q. V. Le, et al, Building High-level Features Using Large Scale Unsupervised Learning, Proceedings of the 29th Inter. Conf. on Machine Learning, Edinburgh, 2012.
Posted by robertwilliamjones at 5:18 AM No comments:

We believe that an AI's primary and learned values should be something like the network outlined in our 21 Sept. 2010 blog post.
Learning of values in humans is, on the other hand, distorted by processes like those described in On Being Certain (R. Burton, St. Martin's Griffin, 2009).
We believe we can give AIs a value system which is superior to that of humans.
Posted by robertwilliamjones at 1:18 PM No comments:

Utility as a case vector component

In Asa H I have frequently treated the one or more case utility(ies) (values, rewards) separately (for example, at line 2150 of the example code in my 10 Feb. 2011 blog).  It is also possible to include the (one or more) case utility(ies) as additional case vector components; including in any vector similarity measures.
Posted by robertwilliamjones at 7:28 AM No comments:

An Asa H/Lego NXT robot is given some initial (innate) primitive outputs like:

Longer sequences can then be built up from combinations of the initial primitives.  A "Waldo" can be used to input new "primitives" later if needed.

Some of these sequences involve feedback.  An example would be the dock and recharge code below (from Parallax for use with the BASIC stamp): 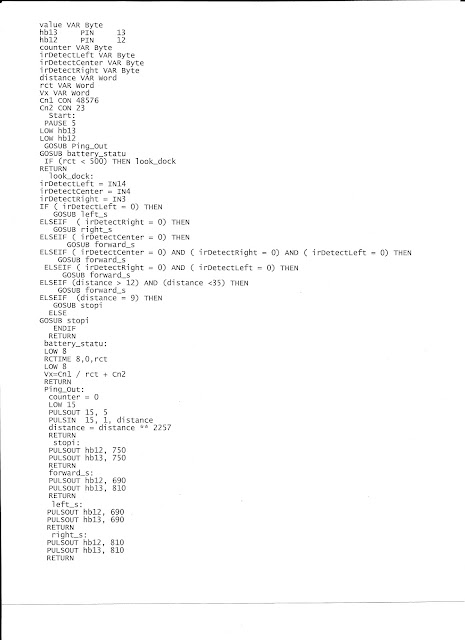 Posted by robertwilliamjones at 5:20 AM No comments: